Why do Recruiters only post the “Region” of the Country for opportunities?

Almost all recruiters provide details on opportunities including a vague description of the actual location of the client. The issue is that not everyone uses the same language to describe the “regions” or states within that region. I was recently asked if I could be more specific than just saying the “Midwest.” It got me thinking, almost all opportunities are spelled out in the cryptic manner. What is the answer to this inconstant use of territories within our country? Let’s start by looking at the variances of regions.

Technically there are five regions of the country including: North East, South East, Midwest, Southwest, and the West. They are broken down as such:

Seems simply enough…but, many recruiters use 7 regions instead of the traditional five. These are broken up as:

To make things more complicated when using 7 regions, no one seems to agree on what states belong in what region. For example, the Rocky Mount Region always includes Colorado, Idaho, Montana, Nevada, Utah, and Wyoming. Sometimes it includes Arizona and New Mexico as well (according to Wikipedia). So what the heck does “sometimes” mean? I would like to suggest that all recruiters use the census map…this would put us all on the same page! 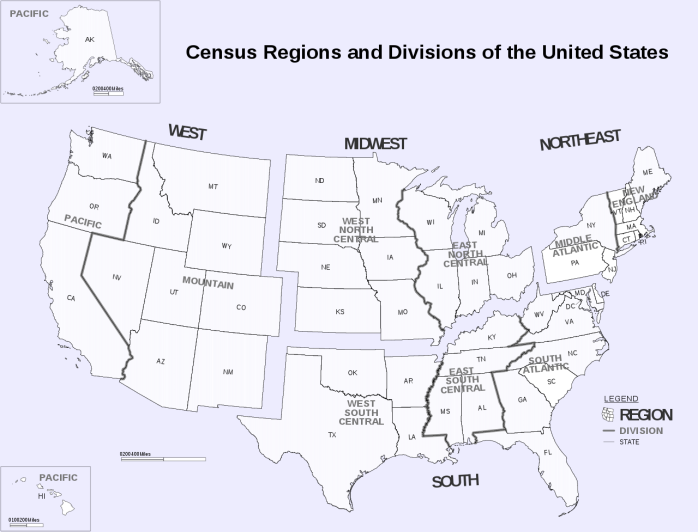 Typically there are enough hospital systems within a state that recruiters should be able to be more specific. I may not be interested in opportunity in North Dakota but have no problem going to Indiana. The Midwest is so big, candidates need to know more. My bad for only saying the “Midwest.”  Imagine finding out an opportunity identified as Pacific is actually in Alaska.  Hopefully that would never happen.  Lets not waste each others time.  As candidates, ask where is the client within the region you posted?  As recruiters, get down to the closest state/city level as you can.

Have you ever inquired about an opportunity with just the region provided as the location? Share your thoughts in the comments area below.

← How much “Consulting” do we actually do as consultants?
5 Tips for Providing References →